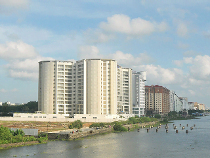 NEW DELHI: Real estate firm DLF is waiting for the final rules under the real estate regulatory act to be notified to see how it can tweak its business model going forward, said Saurabh Chawla, senior executive director (finance) at DLF during a call with analysts.
“We will have to see if we should run our residential business like our commercial business where we construct before we sell,” he said. “We will have to take an educated call once the rules are notified.”
The company has been trying over the last few years to reduce its debt. It’s biggest attempt to reduce debt is the sale of its promoters’ 40% shareholding in the company’s rental arm DLF Cyber City Developers Limited, which is expected to fetch them close to Rs 13,000 crore. The promoters intend to put back this money into the company to help reduce debt.
Chawla said the company has shortlisted potential investors to sell the stake and the deal is expected to be signed in October.
He said DLF had received multiple bids from sovereign funds as well as some global private equity firms and they have shortlisted a few of them. “The investors are doing their due diligence at the moment and it is expected to complete next month,” he said.
ET had reported earlier that DLF has shortlisted six potential buyers for the sale, which involves 26.8 million sq ft of rented office assets with a rental income of over Rs 2,200 crore. The shortlisted parties include GIC, BlacksBlackstone, Warburg Pincus, Brookfield Asset Management, a consortium of Abu Dhabi Investment Authority (ADIA), Kotak Realty Fund and Qatar Investment Authority (QIA) and another fund, whose name could not be ascertained.
Chawla said post the due diligence, the company would sign binding agreements with these investors and then negotiate with them. “By end September or early October, we should be able to guide the market about the culmination of this transaction,” he said.
On the residential side of the business, sales remained muted for the company in the June quarter. “This scenario is likely to remain the same for the next few quarters,” said Ashok Tyagi, chief financial officer for DLF.
DLF’s net debt went up by Rs 285 crore during the June quarter Rs 22,487 crore. On Monday, it had reported an 82.12% increase in its consolidated net profit at Rs 283.04 crore for the quarter ended June 2016 compared to a net profit of Rs 155.41 crore a year ago on the back of one time income from the sale of its cinema exhibition business DT Cinemas.
Tyagi said the company will achieve its guidance of Rs 3000-3,500 crore for gross sales bookings in the fiscal despite the slow market.
(source by:-The Economic Times )