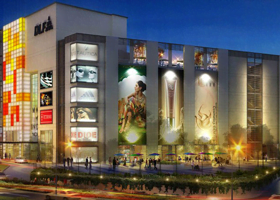 Realty major DLF on Wednesday announced restructuring of its joint venture with global investment firm Blackstone-managed Ridgewood Holdings that had invested Rs 1,481 crore in seven housing projects in 2007.In 2007, DLF had diluted 49 per cent stake in seven residential projects located in Chennai, Bengaluru, Kochi and Indore to a Merrill Lynch & Co entity Ridgewood Holdings, now managed by Blackstone.As part of the restructuring, DLF and Ridgewood Holdings have divided five undeveloped land parcels of about 500 acres in Bengaluru and Chennai. Two projects in Kochi and Indore have already been developed by the partners.DLF, the country’s largest realty firm, would now have 100 per cent stake in two land parcels in Chennai while Ridgewood Holdings would have full ownership of two land parcels in Bengaluru and one in Chennai.In a filing to BSE, DLF said the company and Ridgewood Holdings have decided to “realign the current shareholding arrangement in the JV companies in order to maintain continued focus of future development of various projects”.When contacted, DLF Executive Director (Finance) Saurabh Chawla said: “The realignment of shareholding is in line with DLF’s strategy to focus on certain micro-markets and specific price segment, considering the market conditions.”He said the change in the shareholdings in the five future projects would be “cash-neutral”.“The realignment is only for future projects, which is yet to be launched. There is no change in the existing projects,” Chawla said.Meanwhile, DLF is negotiating with potential investors to sell promoters’ 40 per cent stake in its rental arm DLF Cyber City Developers Ltd (DCCDL) for an estimated Rs 12,000-14,000 crore.Promoters would infuse the amount raised through this proposed deal into the DLF.DLF in October last announced that its promoters will sell their 40 per cent stake in DCCDL. DLF owns remaining 60 per cent stake in DCCDL, which holds the bulk of its office and retail complexes.The deal will be an important step to “create two pure plays – residential business with zero debt and an independent commercial business”, DLF had said in an analyst presentation in May.DLF’s net profit rose marginally to Rs 549.39 crore in 2015-16, from Rs 540.24 crore in the previous year.Income from operations rose 21 per cent to Rs 9,259.86 crore. Its net debt stood at Rs 22,202 crore at the end of the last fiscal.The company’s share price was up 2.43 per cent at Rs 155.80 on BSE in afternoon trade.