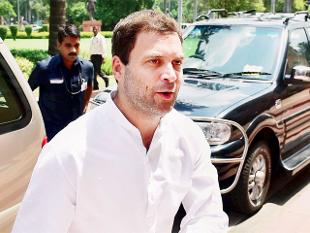 NEW DELHI: Congress Vice-President Rahul Gandhi has assured a group of homebuyers camping in Delhi to press for the passage of the much-delayed real estate regulatory bill that the party will support the legislation in the Rajya Sabha. The members of the group, agitating under the banner ‘Fight for RERA’ after getting tired of the delay in the delivery of the houses they had booked years ago, said Union Urban Development Minister Venkaiah Naidu told them that the Real Estate (Regulation and Development) Bill would be listed in the Rajya Sabha next week. The group includes homebuyers who have come all the way from Hyderabad, Bengaluru, Kolkata and Mumbai, along with the National Capital Region. Most of the group members are facing massive delays in delivery of apartments in different projects across the country. Abhay Upadhyay, national convener of Fight for RERA said Gandhi assured them that the Congress will support the bill in parliament. “We have got a verbal assurance from Rahul Gandhi. He also tweeted but they (Congress) have not issued an official statement so far. While this is a positive for homebuyers, we are not completely satisfied,” said Upadhyay.Under the amendments, projects on at least 500 square metres of area or with eight flats will have to be registered with the proposed regulatory authority, instead of the minimum size of 1,000 sq metres that was suggested earlier. This will bring more projects under the regulator’s purview. If the bill is cleared, builders will have to deposit at least 70% of the sale proceeds, including land cost, in an escrow account to meet construction cost, compared with the earlier proposal for 50% or less, and pay interest to homebuyers for any default or delays at the same rate they charge them. Builders will be liable for structural defects for five years, instead of two years earlier. The new amendments also clearly define carpet area to include usable spaces such as kitchen and toilets. Garage will be kept out of the purview of definition of apartment.