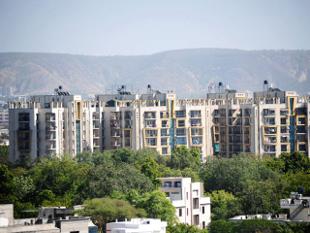 NEW DELHI | BENGALURU: The budget announcement on allowing 100 per cent deduction for profits to housing projects building homes up to 30 sq metres in the four metro cities and 60 sq metres in other cities is likely to spur supply of affordable homes, demand for which makes for almost 90 per cent of the demand for homes in India.“100 per cent deduction for profits to an undertaking in housing project for flats upto 30 sq. metres in four metro cities and 60 sq. metres in other cities, approved during June 2016 to March 2019 and completed in three years. MAT to apply,” finance minister Arun Jaitley announced in the budget today.
Builders and real estate experts say the exemption for affordable housing projects would bring in a 15-20 per cent upside on profits after paying the MAT tax for a real estate developer building such a project, making it easier for the developer to attract foreign and domestic investment for housing projects
In the budget, the FM also said that construction of affordable houses up to 60 square metres under any scheme of the Central or State Government including PPP Schemes will be exempt from service tax.First time home buyers will get deduction for additional interest of Rs 50,000 per annum for loans up to Rs 35 lakh sanctioned in 2016-17, where house cost does not exceed Rs 50 lakh. “This will push developers to redeploy money into building more affordable housing. The FM has tried to address supply side concerns on the housing front. This will bring in much greater supply, spur construction activity and employment connected to it. Anyway 90 per cent of demand for housing is in this segment,” says Rajeev Talwar, chief executive officer of DLF.

Getamber Anand, national president of industry body Confederation of Real Estate Developers’ Associations of India (CREDAI) says the government has actually understood that ease of doing business has to become reality to spruce up the GDP.“There has been a lot of rationalization of taxes. Small pain points of the real estate industry like harassment by excise department on ready mix concrete being manufactured on site for self use have been addressed,” he says.In his speech, Jaitley extended excise duty exemption, which is presently available to concrete mix manufactured at site for use in construction work to ready mix concrete as well.
The big challenge before the industry, Anand says, is to now lobby with states to increase density norms to achieve 30 sq metres and 60 sq metres of housing.
In Haryana, for examples, the density norms are so low that you cannot do 30 sq metres of housing at all.

“Supply of these kinds of homes cannot increase unless density norms area changed and density is increased for housing projects,” he explains.

Anand of CREDAI says the budget has put the onus on real estate developers to finish houses within three years of start if they are to avail the exemption for affordable homes. “This would also be a challenge for us in the absence of single window clearance for project affordable,” he says.“The government’s service tax exemption on houses less than 60 sq m, and the additional exemption of Rs 50,000 for housing loans up to Rs 35 lakhs for homes not above Rs 50 lakhs will both likely improve first-time home buyers’ sentiment,” says Jason Kothari, CEO, Housing.com.Shishir Baijal, managing director of property consultancy Knight Frank India says the housing sector will get a push from both supply and demand side.Baijal pointed out that the government’s focus on digitization of land records is in the right direction especially in the rural areas, which will render land records free from encumbrances.The budget has also increased the limit of deduction of rent paid under section 80GG from Rs 24,000 per annum to Rs 60,000, to provide relief to those who live in rented houses.

Tax benefit on under construction house: Time limit to be raised from 3 to 5 years