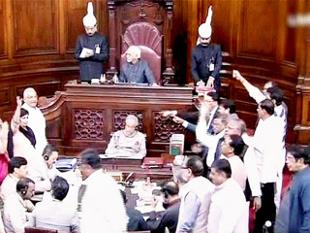 NEW DELHI: The Narendra Modi government has flagged the much-delayed Real Estate Bill as a “priority” bill to be passed in the ongoing Budget session of Parliament.While the BJP government is still trying to garner support for the Goods and Service Tax ( GST) Bill, it is hoping to pass the Real Estate (Development and Regulation) Bill in the current session

According to sources, the government has indicated it as a “priority” Bill and once it sees Parliament functioning normally it would push it in Rajya Sabha.

A senior government official told ET, “This is a high priority bill. We had decided against passing it in the winter session as there was hardly any business conducted. The Rajya Sabha functioned normally in the last 3 days and the government decided to push only non-controversial urgent matters then. If this time there is any indication of Houses running smoothly, it would be done in the first half.”
The government is reaching out to non-Congress parties to push through the legislation, which has passed the scrutiny of a parliamentary committee. The Bill had been referred to a select committee, which had given its report in July last year. However, Congress, Left and AIADMK had expressed their reservations on the report through dissent notes. Seeing stiff opposition right till the select committee, the government had formed an informal group of ministers (GoM) to formulate a politically-acceptable Bill. The ministry of housing and urban poverty alleviation, the ministry spearheading the Bill, accepted all the changes suggested by the select committee and the Cabinet gave its approval with further amendments on December 9. With these changes, the BJP government has even accepted suggestions made by Congress.At present, the government faces the challenge of getting it first passed in Rajya Sabha and then take it to Lok Sabha. This would need a lot of political manoeuvering as the MPs would demand a debate on the Bill in both houses. (source by:-The Times of India )