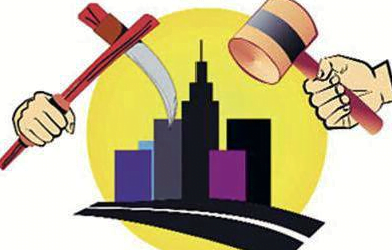 Unauthorised constructions are posing a big challenge to the planned development of Gurgaon. Despite the MCG identifying over 700 illegal structures in the past three years, it has largely failed to act against such activities. Civic officials, however, attribute this failure to a shortage of manpower.
According to an RTI response, 745 unauthorised constructions have been detected by the MCG in the municipal area between January 2013 and December 2015. Suprisingly, the civic body has razed only 41 such structures and not a single FIR has been filed in the 745 cases.
“MCG is turning a blind eye to unauthorised constructions and they have given a free run to builders and developers,” said RTI activist Aseem Takyar, adding there may be a a number of undetected cases.
Town planners say the illegal constructions have been hindering the city’s development as every time a road is to be built or a water pipe is to be laid, the civic body has to raze the structures.